[Message]
I would like to express my sincere congratulations to His Majesty the Emperor of Japan on his 62nd birthday on February 23rd. All of us at the Embassy of Japan in Luxembourg would like to extend our heartfelt felicitations on this auspicious occasion.

We regret that the Embassy of Japan in Luxembourg cannot be holding a reception to celebrate the Emperor's birthday this year as well due to the situation of the Covid-19. So instead, I would like to offer a few words of greeting in the form of a video message.

The accession of His Majesty the Emperor to the throne in 2019 opened the era of “Reiwa”, and we are now in its fourth year.

Last year, while the pandemic was ravaging around the world, His Majesty the Emperor expressed alongside Her Majesty the Empress, his most heartfelt prayers to those who had lost their lives because of the Covid-19 pandemic and offered his most sincere condolences to those left behind to mourn their loved ones in a New Year video message. He assured his utmost respect and appreciation for the efforts of medical and health personnel. He conveyed his hope that all of us, once again, would learn from our experiences and continue our efforts against Covid-19, while further valuing human relationships, sharing the pain, and supporting each other to overcome this difficult situation.

Despite these circumstances, the long-standing exchange between the Japanese Imperial House and the Grand Ducal Family of Luxembourg, and the resulting close friendship has remained and continued to foster significant exchanges: from His Majesty the Emperor’s visit to Luxembourg as Crown Prince to attend His Royal Highness the Prince Guillaume’s wedding in 2012, to the Grand Duke’s attendance at the Ceremony of Enthronement in Japan in October 2019. Moreover, we recently were honoured to welcome His Royal Highness the Grand Duke Henri at the Olympic Games in Tokyo in July last year under the difficult circumstances. These exchanges symbolize the friendship between Japan and Luxembourg and contribute greatly to the promotion of mutual understanding and the development of relations between our two countries.

On a political and economic level, Luxembourg decided in May last year to participate in Expo 2025 Osaka, Kansai, which will be an opportunity to unite our wisdoms for a sustainable and bright future. We welcomed Luxembourg’s early decision and we are all preparing for the success of an upcoming exhibition and are looking forward to seeing Luxembourg’s pavilion.
The Expo’s theme “Designing Future Society for our Lives” deals with a very important topic within the context of the precarious times that we live in. The theme calls on each and every individual to think about his or her own aspirational life, to empower them to realize their full potential, and to push forward the worldwide effort to creating a shared vision of a sustainable society.

On a cultural level, despite the cultural sector being a major victim of coronavirus measures, the Embassy of Japan was able to organise various events introducing aspects of Japan to the public.
Last year, we celebrated our culture via food, sports and arts. We offered a tripartite talk between Japanese and French chefs at the residence, the Paperjam CEO Cocktail event that also showcased Japanese food and sake, an Aikido Demonstration and Workshop, and several projections of Japanese films at Ciné Utopia.
This year, we are excited for Esch being Capital of Culture 2022 and are hopeful that Japan will be able to participate and cooperate in the project.

I hope that this year will see the resumption of wide-ranging people-to-people exchanges, as our Embassy is eager to contribute to the promotion of economic exchanges between our two countries. Although it is still some time away, 2027 will mark the 100th anniversary of the establishment of diplomatic relations between Japan and Luxembourg. We are working on the projects in view of the upcoming anniversary, and we hope that we can count on your cooperation and support.

To conclude this message, I would like to offer my best wishes for the long-lasting prosperity of the Imperial Family.

OKUYAMA Jiro
Ambassador of Japan to the Grand Duchy of Luxembourg 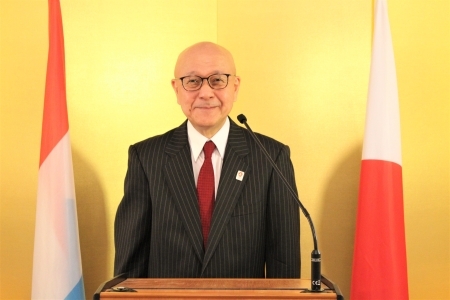 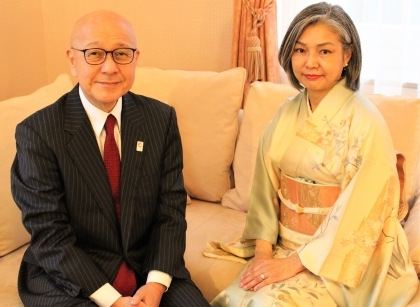